This is NOT financial advice. Please see our Financial and Affiliate Disclosures below for more details.

All right guys, are you ready to learn all about the 3commas bot review. why you should have this in your arsenal, the value that it can provide for you, all about it? All right, welcome in, I’m Dave, I’m here with cryptotutorials.org, and today, I am actually going to sit down. I've been doing a little bit of an interview with a friend of mine called Fun Uncle, a fellow YouTuber who also puts together great crypto content. But on top of this, he's an OG crypto, he's been here since back in 2016, he's someone who used to mine Ethereum and Bitcoin, and he's a trader by nature, he's not as much of an investor or a holder as he is a trader.

So 3Commas is his trading bot, and during my interview, we went over it for a little while and spent some time talking about the value that he gets out of it, why he uses it, and how it's been able to save him money. So I just thought it was really interesting, and I want to pull this out and save it as a separate piece instead of including it in the interview, because anybody looking for the 3commas bot review and thinking about using it, this is going to help you out. All right, do me a favor, hit the like button down below, that's going to make sure that YouTube knows this is a useful piece of content to share it with people looking for 3Commas' information.

And then, pound that subscribe button, that way you can get the entire series, I’m going to continue doing interviews with NFT experts, with other traders and investors, and people from different companies, so we're going to add these interviews into the channel, and it's great information for you to learn. Okay? Do me a favor,, hit those buttons, and let's get started.

Warning. I am not a financial advisor and this is not investment advice. Seek a professional.

Hey, guess what, it's almost time for the Blocto sale. That's right. If you don't know Blocto is a token out there that I’m really excited about. I did a Bounty Airdrop for them not too long ago and received $200 worth of free Blocto wallet token. But on top of that, I also got to buy in before this, before their public sale when everybody gets a chance to buy in, me and everybody else who participated had a chance to buy in early, get early round pricing, and get in ahead of everybody else when the token goes.

So keep an eye on Blocto, if you think that this looks like something you wish you'd participated in, then go to getmyfreecrypto.com, that's where I have a Bounty Airdrop Masterclass that's going to teach you how to pick good Airdrops, how to find them, how to safely do them so that you can get a chance to get in on some of these early release tokens before they get out to everybody. All right, once again, getmyfreecrypto.com – normally, it's a $97 Airdrop Masterclass, it is free right now, so jump on this while it's still available.

David: All right, aloha guys, welcome. I’m David here with Crypto Tutorials. We got one of my fellow LADZ City lads here. If you don't know LADZ City, it's the city of NFTs, and I’ve got Fun Uncle here with me, he's an OG crypto trader, going to share some advice with us. I know we talked a little bit at one point about this, but you have some interesting, I can't remember what it was called, it was a certain thing that allowed you to buy best price for multiple different exchanges with a tool, can you give me kind of a little rundown on that, because that's interesting?

Richard: Yeah, so it's called 3Commas, it's the number three, commas, and it is a trading bot algorithm that I think cost me 600 bucks a year, and what that then shows me signals, it tells me like what's a good buy right now, and then, what it also does is, so you can pair up to 10 exchanges with one app, and if you've ever heard of an app called HootSuite before...

Richard: So imagine just like that. where you can pair your Facebook and your Instagram and your whatever, your LinkedIn to it, and so, one post you make, can go out to all of them. It does the same thing where I can pair Binance.US my Coinbase Pro, my Bittrex, my Bybit to it; and, let's say, I want to buy some Shiba coin, it would tell me you're going to have a better buy opportunity on Bittrex over Coinbase Pro.

Bot can predict the price?

David: So you're saying that it can price out which exchange is going to give you a better price on this, how much of a difference are we talking about here?

Richard: Pennies. But if you're buying 1000 of them or a couple of 1000 of them, that's great. But then the other thing it does, because, for example, even if it is a better price somewhere else, I would have more money on a different exchange, so I'm like even if it is a penny cheaper over here, I’d do it with where I’ve got more liquidity over here. The real thing it does, it's amazing. let's say, I want to put-in a buy order for 25 cents, you can activate a trailing buy, which is one of the algorithms in the system, where, sure, I put in a buy for 25 cents, but it uses its bought to be like, oh wait, but the price is shifting down, so it'll actively put me in for 24, and then when it approaches 24, it puts me up to 23.

Doing that at supersonic bot speeds, faster than I ever could, and that's the real, like, that's the $600 a year just there, for me at least, because...

David: And probably they're going to assume on the other direction that you can trail stop loss it on your way up when you're riding up. So that when it turns on... Because that's totally one of the things that I’ve run into that there are just no exchanges that you can Bogged Finance has it a little bit for Defi, but it's all so clunky, trying to get a trailing stop loss because that’s great. 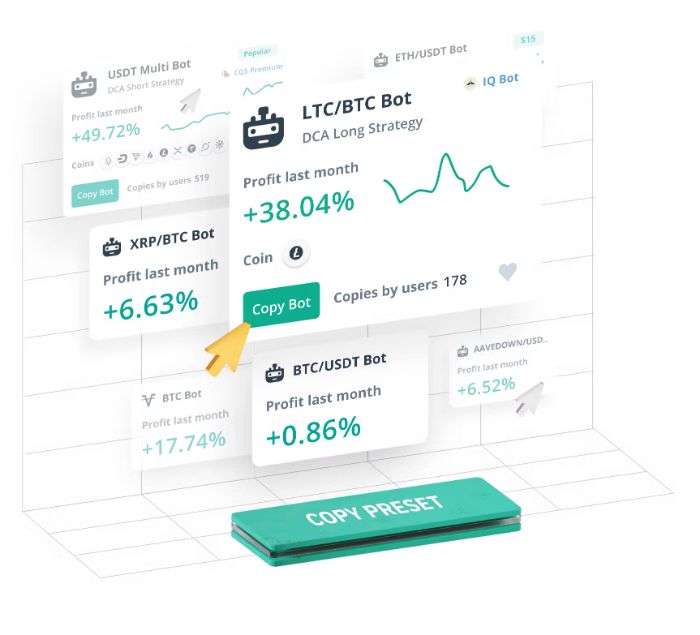 David: Intelligently know that this is the point where this is where you need to get out and get something that's beautiful.

Richard: And the fact that, you know, because I’m pre-bots, I was trading before bots even existed, and you're competing with bots. If you're trying to trade on Binance or something else, those bots will beat you, and that's actually all they do is try to beat you. So, I was just like, all right, well, I got to get a bot, if that's the only real way to do it, and it took so much pressure and stress off of me, and I’ve actually had a couple of trades where I put them in and the bot just crushed it, I did not do anything, did not make the buy, totally stopped it and nuked the order.

I even remember like doing it a couple times, it was like, no, do it, like, do it, and it nuked it, and then the price tanked. And I was like, thank you for nuking the trade, you're doing...

David: That's really cool that it'll like literally be like, no, I’m so sure based on what I’ve seen it's going to go this way...

David: You are not letting it happen.

Richard: So 3commas bot review, I guess, I highly recommend it, it's worth the price of admission, especially if you're using it. Go for it.

David: Yeah, for sure, I’m going to have to find out more about this one. This is a very interesting thing.

Richard: There's even a copy-paste function in it, where you can see a forum of the best traders, it's like, there's like a trader – I was just seeing the other day who did 25% in the last week, and you can just copy it, you could just like, okay, now I want to...

David: Just want to do whatever this guy does.

Richard: Right, whatever he does, now do it with my money too is a feature you can...

David: Interesting. So you can ride off of people who seem to know what they're doing, and they're doing well, that's cool, that's very, very cool.

All right, guys. Well, that brings us to the end of our three-part series with Fun Uncle Richard Kilpatrick. Thank you a million, Richard, for coming out and giving us all this great information about Trade or Hodl, and your experience in the 3commas bot review, we all really appreciate it. If you missed any segment, I'm going to link the other two videos here right at the end, so you can jump across and catch more of this interview if you find it interesting. If there are questions that you have, just leave me in the comments below, I can always reach out and get more information, and if you guys have enough questions, I’ll be glad to bring Richard back on the channel and do another talk with him, so we can all learn more from someone who's got a lot of really good trading experience.

Also check out my article on discord tip bot tutorial. All right guys, have a wonderful day, much aloha.

How Would You Like To Get
100% FREE Crypto Coins

Please log in again. The login page will open in a new tab. After logging in you can close it and return to this page.

We use cookies on our website to give you the most relevant experience by remembering your preferences and repeat visits. By clicking “Accept”, you consent to the use of ALL the cookies.
Cookie settingsACCEPT
Manage consent

This website uses cookies to improve your experience while you navigate through the website. Out of these, the cookies that are categorized as necessary are stored on your browser as they are essential for the working of basic functionalities of the website. We also use third-party cookies that help us analyze and understand how you use this website. These cookies will be stored in your browser only with your consent. You also have the option to opt-out of these cookies. But opting out of some of these cookies may affect your browsing experience.
Necessary Always Enabled
Necessary cookies are absolutely essential for the website to function properly. These cookies ensure basic functionalities and security features of the website, anonymously.
Functional
Functional cookies help to perform certain functionalities like sharing the content of the website on social media platforms, collect feedbacks, and other third-party features.
Performance
Performance cookies are used to understand and analyze the key performance indexes of the website which helps in delivering a better user experience for the visitors.
Analytics
Analytical cookies are used to understand how visitors interact with the website. These cookies help provide information on metrics the number of visitors, bounce rate, traffic source, etc.
Advertisement
Advertisement cookies are used to provide visitors with relevant ads and marketing campaigns. These cookies track visitors across websites and collect information to provide customized ads.
Others
Other uncategorized cookies are those that are being analyzed and have not been classified into a category as yet.
SAVE & ACCEPT